A Short History of the Word 'Cunt'

The king of curse words, the sultan of swear words, the prince of profanity, ‘cunt’ is the absolute mother of all potty mouthed utterances, but why is it considered so rude? One hundred times worse than ‘bollocks’ and a definite step up from ‘fuck’, the word ‘cunt’ is what makes our rude congratulations cards so damn rude. Just imagine the reception you would get from sending your mate one of the “Look Who’s A Clever Cunt! #congratufuckinglations” congratulations cards available on our cardshit.com website.The subtler “Have You Seen Mike Hunt” greetings card is a more subdued choice, for those who want to make a more understated impact, whilst our “Cunt” and “Mega Cunt” greetings cards are a bit more obvious. 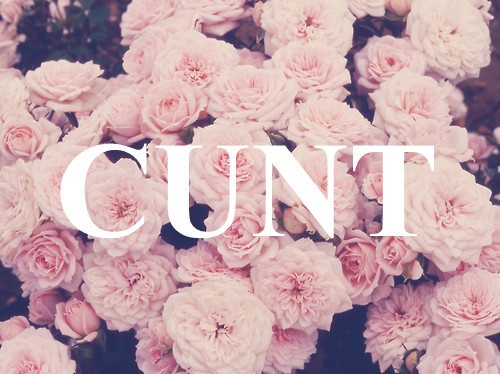 For well over 200 years, ‘cunt’ has been the most offensive and most shocking of swear words, and like most other profanities, the word is a euphemism for genitals, more specifically the female anatomy. But when there are literally thousands of other swear words out there, why is ‘cunt’ so fucking rude?

To be honest, we aren’t quite sure, but we do know that technically, the word ‘cunt’ hasn’t always been so controversial, and initially the word is thought to have derived from the Old Norse word ‘kunta’ and the Dutch ‘kunte’ which themselves are thought to come from the Latin for ‘sword sheath’. Which is actually a pretty apt when you think about it…

Euphemism or not, the word ‘cunt’ goes way back to before rude congratulations cards were even invented, and used to appear frequently in place names, medical manuals and last names, meaning taking a trip to ‘Gropecunt Lane’ was a common occurrence. Code name for the red-light districts of yore, you couldn’t move for cunts back in the day, and you could even live next door to the Wydecunthes, a rather unfortunate surname if you ask us. Thankfully all of our decency has been preserved, and ‘Gropecunt Lane’ has been renamed the rather boring ‘Grape Lane’ instead.

A form of the word has also been traced back to ancient Egypt, where it was just a synonym for ‘woman’, whilst in American slang, the term (often spelt ‘kunt’) is an endearing one used in the LGBT community for gay males to refer to other gay males, or to refer to something feminine and delicate. So it’s not all bad then, is it?

In fact, the word ‘cunt’ appears in loads of places: in nautical terms, a ‘cunt splice’ is a type of rope splice used in the rigging of ships, the ‘cuntline’ is the space between two casks stowed on a ship and in the US military their ‘garrison caps’ are often referred to as ‘cunt caps’ thanks to the shape of them and ‘cunt hair’ is a way of saying ‘a very small distance’.

So there you have it, the c-word doesn’t have nearly as much punch as you might think, but underneath it all, it’s the feminists that have truly embraced the word and made it what it is today. Aiming to reclaim ‘cunt’ as a perfectly acceptable and revered word for an empowered and confident individual, we like this definition of the word best. So whether you’re cunty, cuntish, cunt-faced, or just a right cunt, embrace the power of this often taboo word, own it and shout it from the rooftops (or just put it on a rude greetings card instead).