A Short History of the Word 'Shit'

Whether your brand-new car is ‘shit’ or ‘the shit’, how you interpret the word ‘shit’ has a big impact on your understanding of that sentence. The word ‘shit’ can have many different meanings depending on the context it is uttered in, and most of the time it is up to you to figure out whether it’s used to mean something good or something bad. It’s versatile, fun to say and has a complicated origin, and that’s why we at cardshit.com obviously love the word ‘shit’ and try to use it as much as possible in all of our rude greetings cards. “They Say The Quickest Way To Get Over Someone Is A Shitload Of One Night Stands” break up card or our “Sorry You've Got The Shits #Getwellsoon” get well soon card are all adorned with the glorious word that is ‘shit’. 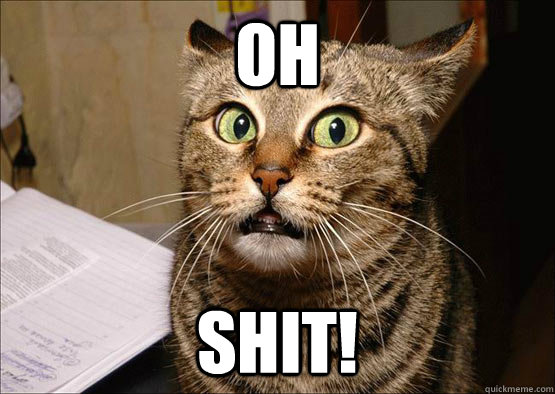 But why is it so rude? You can’t deny that the word ‘shit’ has always referred to poo, but it's real origins are a little more sketchy. Rumour has it that the word comes from the olden days acronym, ‘Ship High In Transit’ which comes from the fact that when they used to transport manure (shit) by boat the manure often got wet which began the fermentation process and gave off methane gas. When someone came below deck with a lantern, the gas ignited and the ship effectively exploded. After this happened a few times they decided that the shit should be stored as high up on the ship as possible to avoid the manure from getting wet; it was then stamped with the acronym ‘S.H.I.T’. Cute story, huh? Well unfortunately it’s an absolute crock of horse shit.

The word actually more than likely comes from Old English words (as all good swear words do) such as scite which is a word for ‘dung’ and scītan which means ‘to defecate’ which then became the Middle English words schītte, which means ‘excrement’’, schyt which means ‘diarrhoea’ and shiten which means ‘to defecate’. Over time however, the word ‘shit’ has lost its gross connotations, and thanks to the Black American slang tradition of making negatives positives, we can now call our rude break up cards ‘the shit’ and mean that they are the pinnacle of cool.

Not just reserved for excrement or really great things, the word ‘shit’ can make sense in most sentences. From ‘talking shit’, ‘being in the shit’ and ‘doing a massive shit’ to ‘aww shit!’, ‘shit-faced’ and ‘you’re a shit’, the word shit is definitely the shit when it comes to making a sentence less shit.

Denoting everything from rage, anger, surprise, joy, fear and displeasure, you can also use our trusty favourite word ‘shit’ as an add-on to many animal names to change the meaning drastically. For example, using ‘bullshit’ and ‘horseshit’ means you believe that something isn’t true, ‘chickenshit’ means you’re a coward, ‘batshit’ means you’re going crazy and ‘apeshit’ means you’re either really angry or really excited about something.

So, go forth and ‘shit’ up a storm (you can interpret that in whatever way you like).