The History of Valentine's Day

Valentine’s Day might seem like it’s all flowers and hearts, chocolates and Valentine’s Day cards, but underneath this embarrassing and cringe worthy holiday, there is a brutal and violent story behind the 14th February and why we celebrate it each year. 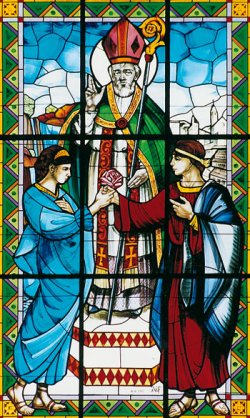 Named after St Valentine of Terni, this saint was a Roman physician and priest who was beaten, stoned and beheaded in 269 AD for marrying Christian couples. Romantic huh? Nothing gets those love juices flowing like a good old beheading and beating, right? Really puts you in the mood for a nice steak dinner and a few glasses of wine.

St Valentine became associated with romance and became the patron saint of love, young people and marriages thanks to his connection to marriage, but he was also the patron saint of plague, epilepsy and beekeepers, so you can try and combine those themes into this year’s Valentine’s Day cards for a good laugh. If you play your cards right, you could be sending your lover one of our “Dinner For Two? It’s 69 Time” anniversary cards this year too, or if all else fails, our “I Now Pronounce You Dumped And Single. You May Now Kiss My Arse” breakup/divorce card looks pretty good on the mantel piece as well.

Although all of this Valentine’s shit went down in 269 AD, it wasn’t until 496 AD that he was given February 14th as his feast day thanks to Pope Gelasius I, and it is thought that the day was created to replace the pagan fertility festival of Lupercalia. Those religious types were always getting jealous of the cool pagan festivals that were celebrated, replacing them with their own boring religious versions. After all he went through, Valentine didn’t even get the appreciation he deserved until Chaucer wrote about Valentine’s Day as the time “when every fowl cometh there to chose his mate”.

So, where did the romantic Valentine’s Day cards come from? According to legend, St Valentine fell in love with the blind daughter of his jailer and he wrote her a farewell letter signed “from your Valentine” (although we’re not sure how she read them, if she couldn’t see) before he was executed, he then cured her sight (yes, from beyond the grave). I mean, it’s no “Sexy Slapper”, “Fit As Fuck” or “I’d Ride You Like a Stolen Bike”, but I suppose “from your Valentine” will do.

Aside from Valentine’s Day cards, the other customs such as sending flowers, chocolates and gifts associated with Valentine’s Day actually originated in the UK, and in some parts of Norfolk a mythical character called ‘Jack’ Valentine knocks on the back door (just like you’ll be doing this February 14th) of houses and leaves sweets and presents for the kids.

Apart from the religious crimes, the association with love and the day named after him, we don’t actually know a lot about St Valentine himself. In fact, there are eleven ‘Valentines’ commemorated by the Catholic Church and no one is really sure if the day was named after just one of them, or all of them, so if you’re ever feeling insignificant on 14th February, just keep that in mind.

So, this year, as you pick out the perfect Valentine’s Day card for your significant other on February 14th, just spare a thought for old St Valentine and his bloody, painful and unnecessary death. No wonder the colour red is associated with this romantic day.