In a world where the newspapers and the media vault from shouting about ‘PC gone mad’ to being the very ones who make allegations when people aren’t abiding by the so-called rules of ‘political correctness’, it’s time for a bit of a shake-up. We need to stop being so offended by every single little thing people say and do. Although the movement arises from the laudable desire to sweep away the debris of racism, sexism and hatred, it can often prevent us from openly discussing race, religion, sexuality etc. If freedom of expression is limited, we lose opportunities to explore more about ourselves, society and the world. So stop being so bloody upset at something as simple as when your mate sends you a rude get well soon card when you’re feeling poorly. In fact, you’re the sexist one for being offended by our “Man Up You Pussy #getwellsoon”, “Strap a Pair On #getwellsoon” or “Man the Fuck Up #getwellsoon” rude get well soon cards. Men can be pussies too you know! 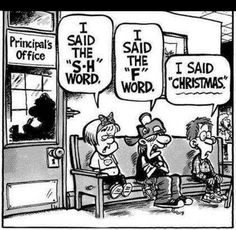 Political correctness has even gone so far that London based website HITC (Here is the City) posted an eye-opening list of the top examples of political correctness gone mad in recent years, and our favourite has to be the fact that the classic English dessert Spotted Dick has been renamed by certain English councils to Spotted Richard to avoid embarrassment and inappropriateness. If you’re going to be offended by the name of a dessert then you might want to send your other half a “Happy Birthday Sugar Richard” anniversary card, instead of our highly embarrassing and inappropriate “Happy Birthday Sugar Dick” option…

As reported by Yahoo News, a UK recruiter was left aghast in another example of political correctness gone too far when her advert for a ‘hardworking’ and ‘reliable’ worker was rejected as it was deemed offensive to lazy and unreliable people. Alas, no one is safe from the PC Police, and if you thought that out of everyone, good guy Santa Claus with his gentle eyes and friendly gift giving ways could escape, then you would be dead wrong, as in 2007, Santa Clauses in Sydney were banned from saying ‘Ho Ho Ho’ as the phrase could frighten children and be seen as derogatory to women. If old Saint Nick has a thing for hoe hoe hoes, then it would be a very Merry Christmas indeed. The Australian version of The Daily Telegraph even reported last year that the terms ‘sportsmanlike’ and ‘disabled’ where being banned from universities for being too offensive, so no one’s safe. We, as a nation have a problem, we’re sick with the PC virus, and we need some highly offensive get well soon cards to help make us feel better.

Politically correct culture is on the turn now, and after years of ranting and raving about the extremities of people’s reactions, some people are starting to retaliate. This can be seen by President Donald Trump’s massive success with certain constituencies in the US. Whilst the world at large seems to see him as the sandy haired buffoon that he is, his supporters really do believe every single word he says. Hooked by his refreshing non-political style of business, Trump doesn’t buy into the PC bullshit that we’re so used to conforming to, and his backers simply can’t get enough of his straight-talking ways. Whether you like it or not, you won’t find the President of the United States of America censoring himself with namby pamby words like ‘Spotted Richard’, instead he’ll just say it like it is, grab you by the pussy and get the hell on with it.