Believe us, we’ve heard it all before: “swearing shows how undeveloped your vocabulary is”, “using swear words only goes to show how stupid you are”, sending rude greetings cards is for dummies. Blah blah blah! Well we’d like to give a big ‘fuck you’ to all of those teachers, aunts, uncles and parents that put us down and said that our shitty foul mouthed ways showed how fucking dumb we are, because a 2015 study by the Language Sciences Journal in America has discovered that people who use swear words tend to have a higher level of intelligence. 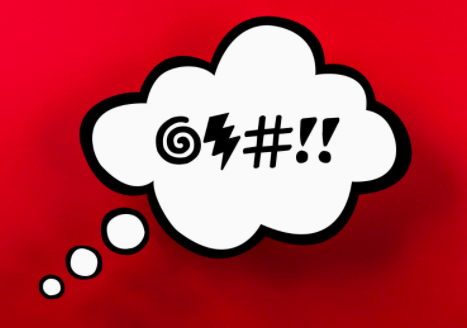 There you have it, people who swear are scientifically proven to have higher intelligence and a better vocabulary! Therefore, people who send rude greetings cards are pretty damn smart too. According to US-based psychologists Kristin and Timothy Jay, using swear words is not a sign of the “poverty of vocabulary” (the assumption that swear words are being used in place of more intellectually acceptable words), but rather people who have a wide vocabulary of profanities, also have a wide vocabulary in general.

“The overall finding of this set of studies, that taboo fluency is positively correlated with other measures of verbal fluency, undermines the POV [Poverty of Vocabulary] view of swearing. That is, a voluminous taboo lexicon may better be considered an indicator of healthy verbal abilities rather than a cover for their deficiencies. Speakers who use taboo words understand their general expressive content as well as nuanced distinctions that must be drawn to use slurs appropriately.”

So it’s official, we foul-mouthed aficionados are actually brainier than those prim and proper prudes out there who condemn swearing! So why not send your potty mouthed pals a rude congratulations card like our, “Look Who’s a Clever Cunt #congratufuckinglations” card” to celebrate, of maybe post off a few rude greetings cards like our “Got You This Shitty Fucking Card” or “You’re The Fucking Best” rude greetings cards to really hammer home your natural flair for those taboo words.

Now as exciting as news of this study is, in reality it is only one single study that investigates one single aspect of language and vocabulary, so it’s not exactly set in stone that these findings are entirely accurate, or even representative of true intelligence but nobody else has to know that, do they? As far as we, and the rest of the media are concerned, throwing in a fucking swear word every so fucking often is definitely a sign of higher intelligence and that’s the story we are fucking sticking to. Just imagine the sailor’s mouth that Einstein and other great scholars would have had. It would make you blush just thinking about it, wouldn’t it?

That being said, scientists are pretty interested in all sorts of swearing related topics such as how young people learn to swear (it can be as young as 2 or 3 years old), why swearing causes so much offence, who swears the most (extroverts swear more than introverts) and which swear words we favour (80% of swearing consists of the same ten words!), so prepare yourself for a whole lot more information on the benefits and drawbacks of swearing in the near future.