Here’s a fact to cheer you up a bit. Did you know that it’s an age-old myth that half of all marriages end in divorce these days?  The number is actually a bit closer to 40%, which is much more reassuring I guess. It even turns out that you can put those divorce cards away if you were married after 1990, as you are much less likely to get divorced than if you got married before then. However, if you did happen to get married before 1990, you might want to check out the hilarious range of “Congratulations On the Divorce. Happy Clunge Hunting”, “Don’t Cry Because It’s Over, Smile Because That Twat Is Someone Else’s Problem” and “It’s Better To Have Loved And Lost Than To Be With A Cheating Bellend” rude divorce cards available at cardshit.com. 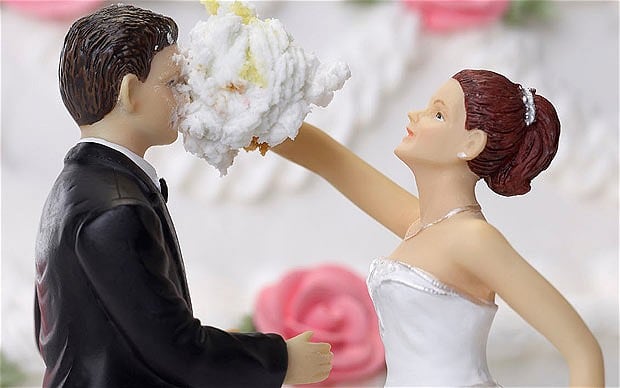 Contrary to popular belief, you might be surprised to hear that divorce rates are actually decreasing over time, and a recent report by the Office of National Statistics found that the percentage of marriages ending in divorce had increased for those who married between 1970 and 1990 (22% of marriages in 1970 had ended by their 15th anniversary), whereas those who married since the year 2000 have enjoyed a decrease in divorce rates. Looks like our generation isn’t all that bad after all.

For those who are still together despite the increasing pressure from society for them to split, you can reward them with a “Dinner For Two? It's 69 Time #happyanniversary” or “Happy Anniversary Sugar Tits” rude anniversary card.

It is thought that this drastic fall in divorce rates in recent years is due to a few factors, one of which Harry Benson, research director of the Marriage Foundation says is: “Today’s marriages include fewer ‘sliders’ who get married under family or social pressure to do the decent thing and more ‘deciders’ who really mean it.”

Another reason – according to Katie Lowe, a family lawyer with JMW Solicitors is that many couples live together before marriage today and that this “cohabitation is almost a form of natural selection for marriage, preventing couples in fragile or troubled relationships from progressing to marriage and, quite possibly, to divorce.” So you are much less likely to be sending your partner a divorce card if you have lived with them for a while before you even think about tying the metaphorical knot.

Getting used to all of their weird little foibles like picking the fluff out from between their toes and eating it, and leaving dirty dishes absolutely everywhere really does help you to adjust to what being married to your boyfriend or girlfriend will be like in the future. So you can wave goodbye to regular sex and fry-ups every morning, because once you’re married, you’ll be trapped in an endless spiral of “Not tonight, I’ve got a headache” and “I might give you a quick blowie if you clean the bathroom first” just like the rest of us. What could be worse?