When it comes to the disintegration and breakdown of relationships, we all know that things can get pretty tough towards the end. One partner stops putting out, the other stops communicating entirely, and what was once the most mind-blowing and magical relationship of your entire life has now become a dreary, grey pit of despair. Thanks to the great range of rude breakup and divorce cards on our cardshit.com website, you can now end that stale relationship with just a first-class stamp instead of a screaming match in front of your neighbours. Why not try our “It's Not You, It's Me Realising You're A Complete Bell End”, “It's Better To Have Boned And Lost Than Never To Have Boned At All” or “I Now Pronounce You Dumped And Single. You May Now Kiss My Arse” divorce and break up cards out for size? To get you in the mood, here are 5 celebrities who have bought a few too many divorce cards, if you know what we mean… 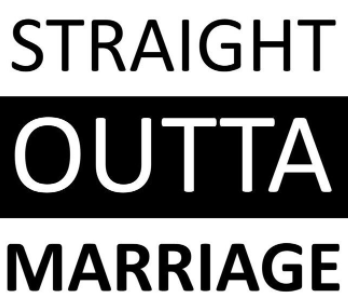 Now married to the biggest dickhead in the world, Kanye West, Kim Kardashian infamously had a 72-day marriage to basketball player Kris Humpries (who incidentally has exactly the same name as her mum, weird). As if that wasn’t enough soulless marriages for one person, Kim also married music producer Damon Thomas when she was just 19.

Another contender for the shortest marriage in celebrity history, pop idol Britney Spears and her childhood friend Jason Alexander got hitched at 'A Little White Wedding Chapel' at 5am in Las Vegas after a few days of partying. 55 hours later, the divorce cards were sent and the wedding was annulled. Talk about changing your mind! This couple didn’t even get to send each other one of our “Happy Nice Meal and Mandatory Shag Day #happyanniversary” rude anniversary cards. Many people contribute this sham marriage as the start of Britney’s downward spiral, ending with another marriage to Kevin Federline which lasted two years.

English actress, author and columnist Joan Collins knows a thing or two about marriage (and a thing or four about sending divorce cards), and with five of them under her belt, you best believe she knows what she’s talking about! Collins who is now 81 recently revealed in a documentary that she married her first husband Maxwell Reed after he raped her and took her virginity. She then went on to marry actor and singer-songwriter Anthony Newley, American businessman and manager Ron Kass, Swedish singer Peter Holm, and finally her fifth husband Percy Gibson (who is over 30 years Collins’ junior).

Oscar winning actor Billy Bob Thornton has been around the block a few times, and even sent his fair share of divorce cards to the likes of Melissa Lee Gatlin, Tori Lawrence, Cynthia Williams, Pietra Dawn Cherniak, but Thornton’s most famous spouse would have to be actress Angelina Jolie. The pair were married for three years from 2000 to 2003 and they even showed their love by wearing vials of each other’s blood around their necks before they broke up. Thornton’s final marriage was to Connie Angland in 2014, and the pair are still married!

Scientology’s poster boy is certainly no stranger to a divorce card or two, and after his marriage to actress Mimi Rogers broke down in 1990, Cruise got wed to Nicole Kidman that same year. After adopting a son, Connor and a daughter, Isabella, the couple divorced 11 years later in 2001 before Cruise married Katie Holmes in 2006. Holmes filed for divorce in 2012 after 6 years of marriage thanks to her fears over what Scientology was doing to him.