Stephen Fry on the "Whining Culture"

Stephen Fry is a true gent; smart, funny, polite, and one of a few sparkling jewels in the crown of British celebrities that we know and love, and we couldn’t agree more with his thoughts and feelings about how everyone needs to stop ‘feeling offended’. We live in a world where people actively strive to feel annoyed about comments that are made or situations that we’re in, and all it does is get us all down, so calm the fuck down, say what you like, and send a few mildly offensive sorry cards to make up for it! 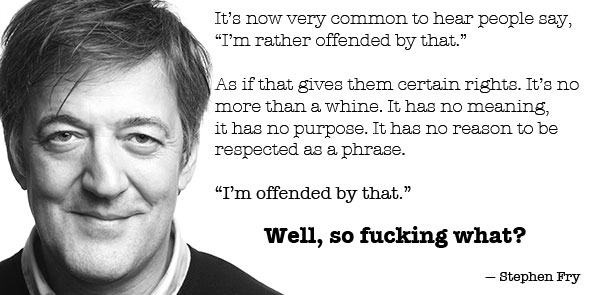 In an interview with the Guardian newspaper, Fry discussed a few heavy issues like blasphemy and what he discovered about his family’s past whilst filming an episode of ‘Who Do You Think You Are?’, but while he was at it, he also raised a few good points about how we live in a world full of complainers, how everyone loves to feel offended nowadays, and how ‘whining culture’ has really taken off.

In the article Fry says, “It's now very common to hear people say, 'I'm rather offended by that.' As if that gives them certain rights. It's actually nothing more... than a whine. 'I find that offensive.' It has no meaning; it has no purpose; it has no reason to be respected as a phrase. 'I am offended by that.' Well, so fucking what."

So, fucking what indeed! In our politically correct culture people really do revel in feeling hurt, offended and personally victimised by off the cuff comments and remarks that are genuinely just meant as a laugh. I mean, would your mate be offended if you sent him one of our “Sorry I Fucked Your Dad”, “Sorry I Fucked Your Mum” or “Sorry I’m a Cunt” sorry cards, or would he see it for the joke that it is? If the answer to that question is that he would feel personally offended, then you need to get yourself some new mates, or just send them one of our “Man The Fuck Up” get well soon cards to help cure their obvious mental illness. After all, it’s just banter, right?

A comedian, actor, writer, presenter and activist, Stephen Fry is undoubtedly qualified to make these comments about whining and feeling offended, and after all of the shit he has had to deal with throughout his life, such as his bipolar disorder, his sexuality, and the age gap between him and his husband, he could have easily turned around and found offense at the things said about him and his lifestyle in the media. Instead, Fry just laughs it off and sees them for the light-hearted jibes that they are. There is a difference between saying something because you’re trying to hurt someone’s feelings, and saying something because it’s funny, and as a comedian Stephen Fry definitely knows what he’s talking about.

A prime example of this overly offended behaviour we’ve come to accept was at last year’s BAFTA awards where Fry presented the BAFTA for Best Costume Design to Jenny Beavan as he muttered “Only one of the great cinematic costume designers would come to an awards ceremony dressed as a bag lady”. The two are old pals, so she laughed, and he laughed. But that wasn’t the end of it, the media and the public got involved and there were literally hundreds of people speaking out about how offended they were for Jenny, when in fact she wasn’t bothered one bit. Why? Because it was a fucking joke!